Keurig coffee makers have made their presence known in many workrooms, employee lounges, and homes across the world. Their innovative design pioneered the fast, single coffee cup worth of coffee in the morning.

This article aims to help you make an informed choice as a consumer before purchasing a Keurig coffee maker by explaining how they work, where they are sold, how much they cost, the current models on the market, and all of the other important decision-making factors for buying a new home appliance.

What is a Keurig Coffee Maker and How Do They Work?

The Keurig coffee maker (or just Keurig for short) is an innovative spin on the traditional coffee maker by producing one cup of coffee at a time. With tons of different flavors and coffee brands available in each K cup, there are plenty of options to choose from. The Keurig coffee maker works by inserting the custom “K Cups” into the top of the coffee maker.  When you close the top, a needle punctures the top of the K Cup. Once you pick the cup size, the water filters through the punctured area of the K cup and begins creating your custom cup of coffee.

There are many models and designs of the Keurig available on the market today. They're available in different sizes shapes and colors for maximum home customization capabilities.

What is the Average Price for a Keurig Coffee Maker?

Keurig coffee makers can range from around $50 all the way up to $200 depending on the model and its features.

Read on for more information about pricing on different models and find out more details about the models themselves under the “Different Models” section:

Where are Keurig Coffee Makers Sold?

Keurig coffee makers are sold at any home appliance stores or stores that sell home appliance products, including Best Buy, Bed, Bath, and Beyond, Target, Kohl’s, and many more. Keurig also has their own official website which sells the coffee maker as well as K Cup (or pod) refills.

You may also find Keurig coffee makers sold through secondary sellers such as on the Facebook marketplace, eBay, Amazon marketplace sellers, and many more venues. However, always use caution when purchasing something from an unauthorized dealer, as warranties are not typically extended to customers buying these products secondhand.

As for the K Cup pod refills, they can be found at most grocery stores as well as the Keurig website. You can even select auto-delivery options for pod refills if you use your Keurig regularly by setting it up on the website.  It promises a commitment-free experience so that you can cancel at any time.

What are the Features of the Keurig Coffee Maker?

Most every Keurig has a button navigation system that is easy to use. Most of the Keurig systems also come with at least one box of coffee pods, though you can also purchase ones without them.

The pods come in many different flavors and brands. You can even purchase name brands such as McDonald’s McCafé, Starbucks, Folgers, Caribou, Dunkin’ Donuts, Krispy Kreme, and more.

What are the Different Models of the Keurig Coffee Maker and Add-On Accessories?

There are currently 25 models listed on the Keurig website organized by their popularity and ratings. For simplicity, we have decided to list five different models that encompass their product range.

The K-Classic model is a fairly basic model of the Keurig. It is capable of making three different sizes of beverages, including 6 oz., 8 oz., and 12 oz. It is operated by a button control panel and comes in both black as well as rhubarb (a red color). It has a water capacity of 48 oz. and has an average star rating of 4 stars.

The smallest and arguably the cutest Keurig model, the Keurig K-Mini Single Serve Coffee Maker is great for limited counter space and small nooks in a room. It comes with four brewing sizes and is operated with button controls. The model comes in matte black as well as oasis (a light blue green color) and was very recently released in standard and plus models.

The K-Elite makes five cup sizes, including 4 oz., 6 oz., 8 oz., 10 oz., and 12 oz. cups. A notable feature about the K-Elite is that it has a Strong Brew setting for strong coffee and has a sleek, metallic finish. Additionally, it is perfect for making iced coffee with the Iced Setting.

It has an impressive 75 oz. water capacity, capable of making up to eight cups of coffee before having to refill it. It comes in the colors of Brushed Slate (black) and Brushed Silver.

The Keurig K50 is an earlier version of the K-Classic and is most popularly paired with bundle sets. See the K-Classic description for more details about the appliance itself.

Bundles available with the Keurig K50 include the McCafé, Krispy Kreme, Dunkin’ Donuts, Starbucks, and the Experience Bundle featuring a sample of many types of pods. 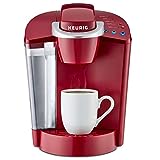 The K-Select model can brew four different sizes, including 6 oz., 8 oz., 10 oz., and 12 oz. sizes. It has a 52 oz. water reservoir and a Quiet Brew feature that reduces the noise made by the machine during use.

This model comes in Matte Black, Matte White, and Vintage Red as color choices and is made of a fingerprint-resistant material for a clean, sleek look.

As opposed to a traditional coffee pot or other coffee maker, the Keurig makes coffee by the cup to reduce the amount of coffee you must make. It is perfect for the person who would rather not have a pot of coffee lying out all day and just needs enough for one cup.

Other brands have made similar single cup coffee makers like the Keurig, including Gevalia, Cuisinart, Primula, Ninja, among other choices. But many still lose to the Keurig coffee maker in popularity.

Keep in mind that the Keurig website allows customers to compare and contrast each of their models together in order to see the different features of each before making a purchasing decision. However, it does not compare the Keurig models to other single serve coffee maker brands.

What Have Past Customers Said?

Feedback about Keurig coffee makers completely depends on the model, but the overall perception of Keurig is fairly positive. Each Keurig listed on their website normally gets four to five star reviews. Though feedback completely depends on the model purchased, many applaud each of the coffee makers for their design and efficiency. For example, reviews of the K-Mini model report that it is just as easy to use as a larger Keurig for less space consumption with no reviews at the two or one star level.

The same cannot be said for the K-Classic, though most of the reviews are positive. An unusually high number of one-star reviews report that the model breaks down within a year, making the USD119.99 cost point as way too high for the model.

The K-Elite has an impressive record of five star reviews with comments claiming the quality and taste of the coffee brewed is better than past models. Some criticisms about the K-Elite range from the quality of the instruction manual to leaving large coffee ground chunks in completed drinks.

The K50 is similar to the K-Classic and does not have reviews listed for the bundle packs on the website, but that does not mean reviews do not exist elsewhere. There are plenty of reviews of the model located on Amazon that rate it very consistently at five stars with some variation.

One review noted that if you descale the model, it makes a very loud sound when making coffee and that it starts to malfunction soon after purchase. However, these reviews do not come up often and the majority of the reviews report overall great satisfaction with the model.

The K-Select model averages at around a four star rating. Though most of the reviews report the product at five stars, there is a fairly even number of four, three, two, and one-star reviews. The one star reviews are from customers experiencing technical difficulties, such as the pod area of the machine breaking apart or becoming defunct after descaling due to technical problems. Some complaints are fairly recent, such as within the past few months.

On the site Consumer Reports, there is a large mixture of reviews from verified customers from all over the United States. There seem to be either five star or one star reviews without much room in the middle, indicating that a customer’s experience is either great or awful. This is perhaps due to inconsistent assembly or factory oversights from large scale productions of the product.

Overall, it seems that Keurig is very attentive to reviews that report problems with their machines and often leave notes urging the customer to call customer service for support.

What Do the Experts Say?

No matter how popular Keurig coffee makers are with the general population, there has been plenty of pushback from financial and environmental experts.

Business Insider published a piece about the price of coffee from a Keurig coffee maker being five times the cost of making a pot of coffee the old fashioned way, making it a more expensive option for a lot less coffee. A similar piece was published by Time magazine’s “Money” section with the same results.

Another problem that can come from Keurig coffee makers includes their impact on the environment. While some have praised the Keurig and the K cup for their innovative design, others criticize the design for being environmentally unfriendly and unsustainable. The inability to reuse a K cup is one reason why people may choose not to have a Keurig in their home. However, Keurig has published a statement from their company about their commitment to the environment through sustainability reports about the Keurig Green Mountain Company and others.

On the Consumer Reports’ expert review, the Keurig coffee makers reviewed pass inspection. Nevertheless, the Keurig tends to persist as a top-selling coffee maker in many homes and offices.

Overall, the Keurig coffee maker is a well-made product available in all sorts of different designs that are perfect for any home or office. Despite their environmental and financial controversies, neither have stopped the coffee maker from being a top seller for their performance.

If you are aiming to be more environmentally conscious, it is possible that the Keurig model may not be the best coffee maker for you.

While each product is different, they seem to perform consistently no matter which model is purchased with some variations. If you are looking for a coffee maker that makes single servings, Keurig may be the right model for you.

Instant Pot Ultra Review: A Pressure Cooker to Save You Time and Energy