Warning: mysqli::__construct() expects parameter 4 to be string, array given in /home/enhancedkitchen/public_html/wp-content/plugins/is_privacy_terms/is_privacy_terms.php on line 22
 Presto Food Dehydrator Review 2021: Features, Price, And Ease Of Use Copy Your Code Snippet

We know that things like potato chips, cookies, and sugar are bad for us, but we also know that these are the food we often reach for when we want to snack while watching a good movie.

Below, we reviewed some presto food dehydrators to see if they could provide us with a healthier alternative for movie night.

What Is A Presto Food Dehydrator And How Does It Work?

A food dehydrator is an electrical device for drying food but not cooking it. It can be used to make beef jerky, fruit leather, or even crackers. Vegetables can be dried to use as flavoring in soups and broths and fruit can be dried as an alternative to potato chips.

Is Presto A Good Brand?

National Presto Industries was founded in 1905 in Wisconsin but was originally known as the Northwestern Steel and Iron Works. The company began by making pressure canners of various sizes for hotels and home use.

During World War II, Presto participated in the war effort by making aerial bombs, artillery fuses, and rocket fuses. The received 5 awards from the Army-Navy war production board.

After the war Presto began to manufacture pressure cookers, irons, deep fryers and other kitchen appliances. In the late 1990s they began to look at healthier ways to cook the foods we love, and their food dehydrators sprang from that innovation.

How We Rated The Food Dehydrators 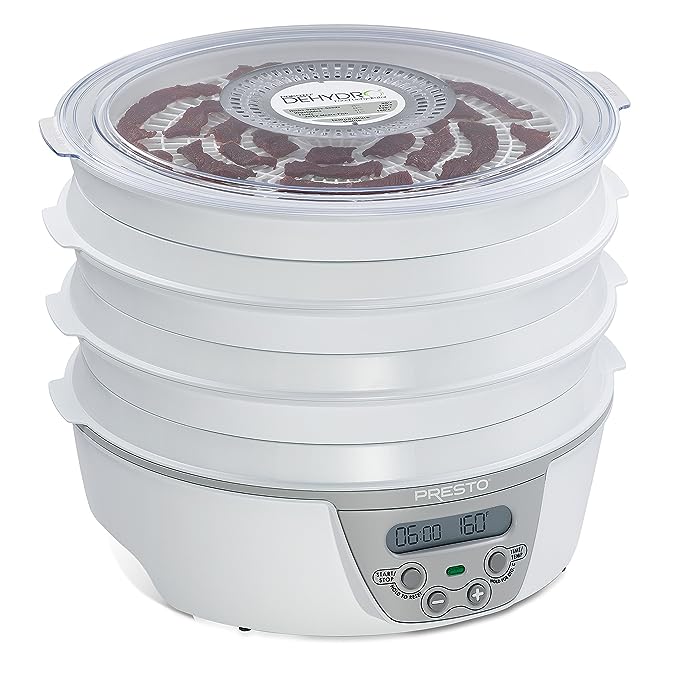 There were many factors we considered when rating the presto Food dehydrators. We looked at the functions and settings of the dehydrators, the size and capacity, and the weight of the product.

Although the price was considered it wasn’t the most important factor as we were more concerned with perceived value for money. We looked at customer reviews where available with an interest in added features and ease of use.

Presto currently has four models of food dehydrators for sale and we reviewed each of them. All are available to buy from Presto’s online store, on Amazon.com, and by other in-store retailers.

Prices ranged from between USD60 to USD100 or around USD35 for a used model. Accessories such as extra food trays can also be purchased.

This model is perfect for dehydrating vegetables, herbs, spices, and fruits. It’s dehydration system ensures that the natural vitamins and minerals in the food is not lost and the drying temperatures is preset at approximately 165F. The heating element and fan work together to circulate air without the need for tray rotation. It comes with a see-through cover, so you can keep an eye on the drying process. All the trays nest together when not in use to save on storage space and the cords can be tucked away neatly in the base of the dehydrator.

This model is slightly bigger and heavier than the 06300 model and it uses a 6-tray system.  Extra features include two fruits roll up sheets to use with fresh, canned, or frozen fruits and two nonstick mesh screens for smaller and stickier food.

The 06301 model has an adjustable thermostat that ranges between 90 to 165F and comes with a beef jerky starter pack. As with the 06300 model all the trays nest together and the cord is stored in the base.

This model is advertised as deluxe and is only available instore at Walmart. It may have been given the deluxe title because it comes with a choice of colored lids and control panels. However, it doesn’t come with any of the extra features that the 06301 and 06302 models have.

What The Reviews Say

In general, the reviews for the Presto Food Dehydrators were positive with many reviewers stating that they loved whichever model they had purchased. Several people commented that they had been using their dehydrator almost constantly since first purchasing it.

Other reviewers stated that they enjoyed being able to provide healthy snacks for the kids rather than buying dried foods that they couldn’t be sure didn’t contain additives and preservatives. Several reviewers bought the food dehydrators to dry chicken and meat for their pets and this save them a considerable amount of money at the pet food store.

The reviews were not 100% positive although the complaints seemed to be minor nuisances rather than huge faults. Some people were annoyed that their dehydrator didn’t have an on/off switch and they had to unplug it to turn it off.

Many people complained that their model was noisy, while others stated that it made a hum that was no louder than a dehumidifier. The reviewers who said it was too loud, moved it into another room and had no further problems.

One review we came across mentioned that the food trays did need to be rotated as they dehydrator did not heat evenly throughout the container.

How Presto Food Dehydrators Compare With Other Brands

The Presto food dehydrators provide good value for money and suit their purpose well. However, they are not the biggest dehydrators on the market and if you intend to dry a lot of food, and you want it done quickly, you would be better to spend some more money to invest in a larger product.

For example, the Excalibur 3926TB 9-Tray Electric Food Dehydrator costs considerably more, but it also comes with more features than the Presto models. It has 9 drying trays which equate to a total of 15sq feet of space.The Excalibur’s thermostat is adjustable and the temperature ranges between 105F to 165F which is on a par with the Presto models. The heating element, fan, and thermostat are on the back of the dehydrator rather than the bottom which allows them to distribute the hot air evenly over the trays instead of from the bottom to the top of the container.

At a similar price to the Presto food dehydrators the Nesco Snackmaster is slightly smaller with dimensions of 13in X 13in X 11in and a weight of 8.76lbs. It comes with 5 trays, a jerky gun with three tips, five jerky spices and cures, two fruits roll sheets, two clean-a-screens, and a recipe book. The reviews for the Snackmaster are positive with only two complaints being mentioned. There’s no on/off switch so it must be unplugged to be turned off and there’s no timer. Both these complaints were also mentioned in the reviews for the Presto food dehydrators so there’s no comparison with these factors.

The only advantage the Snackmaster has over the Presto models is the inclusion of the jerky gun and the recipe book. Recipes can be found online, free of cost, so although this is an added feature of the Nesco product it’s probably not a deal-breaker.

If you intend to make a lot of jerky, the Snackmaster may be your better option. However, for fruit and vegetables, Presto’s size and wattage make it the better option. Presto’s models are more attractive looking, but if you’re not concerned about how the product looks on your kitchen bench, again this is not a deal-breaker.

Buying BPA-free products is important to many people and all Presto’s products are now BPA-free even though they haven’t been in the past.

BPA (bisphenol-A) is a chemical that manufacturer’s use to strengthen plastics. It’s also used to create epoxy resins which are often put in the inside of food cans to prevent them breaking or corroding.

Most brands offer a warranty of some sort with their food dehydrators, but it pays to double-check with your retailer. National Presto Industries state they have replacement parts for sale online however, if you need any maintenance or repairs done on your dehydrator they must be done by Presto’s own factory service department which is a standard requirement with other brands as well.

Presto’s customer service department is open regular business hours so if you do find you have a problem that should be your first port of call.

What We Think Of Presto Food Dehydrators

All in all, the Presto food dehydrators seem to be good products for their prices. It is a little difficult to differentiate one from the other however, and the prices don’t seem to indicate quality or added features between them.

These dehydrators are best suited for home use. The trays are all expandable, as in 6 trays expands to 12 trays and all nest together so you they won’t take up a lot of space in the cupboards. All the accessories can be bought separately and are safe to use in the dishwasher.

Whether the Presto dehydrators are too noisy is a matter of personal preference but if you’re buying instore you should be able to test it out before you take it home. We also advise that you take care where you use your food dehydrator as using it in a small room in the middle of summer may be problematic due to the temperature the food dehydrator needs to be to function properly.

If you’re embarking on a healthy eating regime, want to add a healthy snack to the kid’s lunches, or want to treat your pets, a Presto food dehydrator is the perfect product.

Instant Pot Ultra Review: A Pressure Cooker to Save You Time and Energy

As a participant in the Amazon Services LLC Associates Program, this site may earn from qualifying purchases. We may also earn commissions on purchases from other retail websites.